The past few days have been “interesting” around here. Evenings have become dreaded again, and the boys seem to be fighting more than normal. I’m not really sure what has changed. I thought maybe it was due to the full moon, but the full moon has come and gone and we’re still having issues. It could be the changing weather and the increased rain and wind that we are experiencing. It could be any number of things. All I know is that I want it to stop!

What am I talking about? Sleep. More specifically, E’s continual waking between 3 and 4 AM conflicting with our (the parents) need for more sleep! I’ve recently been dealing with some pretty heavy fatigue and been needing more sleep than the hubs, so he has been taking the brunt of the issue and now the poor guy is walking around in a sleep-deprived daze.

E has always been a difficult sleeper. As a baby, we were shocked at how little he slept. He never napped like normal newborns. I have vivid memories of dad and I taking turns sleeping on the couch, E in his swing that had a 20-minute timer and music. Every 20 minutes we’d have to turn the swing back on or E would wake up and start to cry. As he got older, if we sat in a rocking chair and rocked him to sleep, the moment he was out, we’d try to lay him down and sneak away. We’d do the commando crawl across the floor and try to sneak out. Sometimes this didn’t work and we’d have to start all over. He never napped well when he was little and, when he did, never for long. Road trips were nightmares. A little older and he was needing to sleep in our room with us. Our bed was not conducive to a thrashing child and two adults so we ended up making a pallet bed on the floor at the foot of our bed for him to sleep in. This lasted for about two years. Finally, he was ready to move back into his room and he only used the pallet bed when he’d wake from bad dreams. The night terrors were intense. He would have lucid dreams where he would scream and yell or talk to us and, yet not be awake. It was really hard to learn to communicate with someone’s subconscious.

Finally, we succeeded in a routine that worked. He’d be in bed at about 8:00 and sleep until about 7:00. Awesome. Nope, it was too good to last. At first, he started waking up between 6 and 7 in the morning and it seemed to coincide with the Daylight Saving time change. “Oh he’ll adjust,” we thought. We were wrong! He would now regularly wake before 7:00. After a time, he started waking around 5:30 in the morning. Then it was even earlier. For months now, we’ve been dealing with E waking sometime between 4 and 5 in the morning. Thankfully, he’s a really good kid and knows to let his parents sleep. He will read to himself, play with Legos or something in his room. Then he started asking to watch Netflix on our tablet. Ok sure, but not until 6 am. It’s not ideal that he’s up that early, but we’re working on it.

Unfortunately, our tactics are not working. We have the same bedtime routine as always: last snack before bed, brush teeth and so on then story time. Each boy gets one-on-one time with Mom or Dad. Usually this has fallen to Dad so that I have a few minutes to myself at the end of the day. It’s also a special time for them to have with just Dad. Now, however, helping E to sleep is taking longer and I’ve started helping with bedtime for C. Poor E takes melatonin and then Dad reads to him for almost an hour before he’s sleepy enough for him to leave. Then he wants to be checked on in three minutes. It has to be three. Sometimes it takes two or three checks before he’s finally sleeping. That being said, he seemed to be doing okay on the amount of sleep he was getting, averaging 7-8 hours per night.

Now, however, he has been waking up for the past several days between 3 and 4 AM. One time he was up at 2:30 and couldn’t go back to sleep! This is his new normal, and it’s not good. He seems more tired all the time. He often says that he doesn’t feel good, he’s grumpy and has no tolerance for C, which leads to more fighting between them. As parents, we are exhausted, and have no idea what to do for him. We’ve tried things to help him to no avail. He wants to go back to sleep and can’t. It’s so sad.

It’s really hard to be the mom and teacher for me. As the mom, I want to let him play around and “rest” all day but, as the teacher, I can’t allow that. By the time we sit down for school, his mind is shot. He can’t focus very well, and he has a harder time understanding anything new.

We have another appointment with his meds doctor at the end of the month and will be able to discuss if his medications are causing this or not. In the meantime, what am I, the teacher, to do? Do I have to wake “Mom” me up at 3:00 and start school while he’s refreshed so he can zone out when he’s mentally done? As a sleep-lover, I hate mornings. I have a hard time dragging my butt out of bed a simple half-hour earlier for exercise— how on earth am I even considering this option? I must be crazy. I’m not. I’m a desperate teacher and mother who is watching her son struggle. I will do what I must. 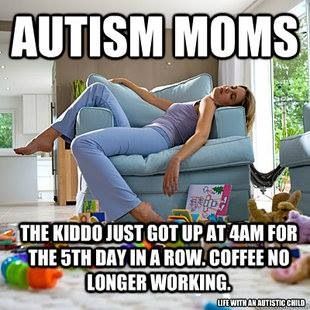 Hi, I'm Brianna — Wife, chef, cleaning lady, teacher, crafter, DIY-er, multitasker and a Stay-At-Home-Mom of two quirky kids. My husband and I have been happily married just over 15 years and continue to grow together. We try to live a simple life. We have a small home, a bit of land, a dog and chickens. We live in a small community and life here can be calm and peaceful, or hectic and crazy at the drop of a hat. A quirky kid is a one who doesn’t fit the mold or conform to what you would think a stereotypical kid would act like. They see the world differently, act differently, and, due to a lack of understanding, may be labeled as a “bad kid.” We love our "quirky kids" and every day with them is an adventure. Sometimes I laugh at things they do, sometimes I cry at things they do and, sometimes, happy hour starts early at my place!! View more posts